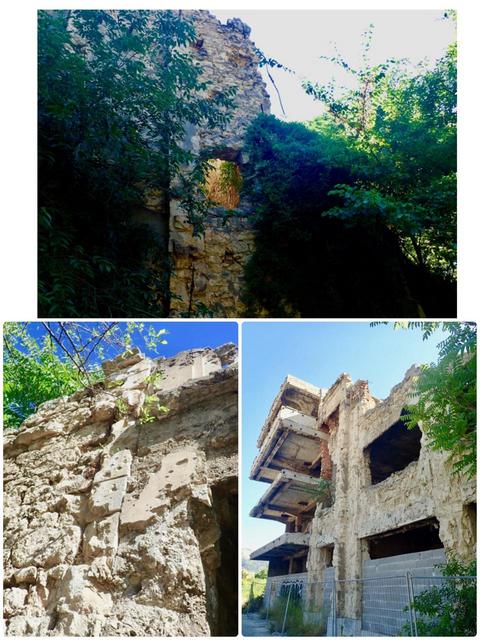 Devastation in Mostar from the Bosnian War

On a cold Bosnian morning, Zlatan Krpić eased himself off his mold ridden pallet near the make-shift stove. It was dark in the small apartment across from the mosque on the alley Adema Buća in Mostar.

He cried out in pain, tears coming unbidden, mostly from the severe, crippling headache he had struggled with since before his grievous leg wound.  He managed to drag himself the two meters to the stove and fed it some scraps of broken chair, recoiling at the acrid smell of the plastic they had burned earlier.

Old Deda, his grandfather still slept as he did most of the time when not being disturbed by the shelling and being hustled into the tunnel networks broken through the bricks of the housing blocks in the neighborhood.  There was no privacy anymore, or real ownership of any space.  All the citizens and fighters were at liberty to enter any safe space at any time to avoid shelling and sniper fire.  The worst was just the random shooting from the troops coming in off M17, the Boulevard, to harry the citizens.

Zlatan had just elbowed his way back to his pallet and covered himself with the rug he used as a quilt when his brother Aleksandar came in from the broken section of wall.

"It's bad out there, do you hear the small arms fire?"

"I can't hear anything but the pounding in my head," the younger man said.

Zlatan rolled over onto his back and said, "It's killing me all the time, and it feels burning hot.  It's getting red streaks going up, and the stump is smelling terrible.  None of that is as bad as this headache."

He did not include his feeling that he would put a bullet into his head if it were not that it would waste a round his brother might need to protect himself or Deda.

Aleksandar dipped a rag into the water bucket, rang it out, folded it and put it on his brother's forehead.  Any relief was better than none, and he could see that Zlatan was in worse shape today than he had seen since the 20mm cannon round had taken his leg in January.  They had done what they could for him then and it had been enough to keep him alive.  Aleksander had cut away the shreds of flesh and tendon while Zlatan was unconscious. The crude belt tourniquet stopped the hemorrhage long enough to cauterize the stump with some gun powder ignited by a small steel tray heated to a deep glowing red.  It was good the young man was unconscious.

FOR THE BLOOD OF PIGEONS

The Stories Behind the Stories

the backstories behind my works